It looks as if there is an issue with turning on the face grouping option in the U.K. within Google photos.

I am not too sure if this is a Google restriction or maybe a GDPR issue, one thing that I am aware of is that I want this option turned on for my Google photos.

Enabling this option will set Google to work and let it scan through your photos library to create albums from faces it thinks look to be the same (it doesn't always get it right).

In order to enable this option within google photos I need to access the photos website via the U.S.

I used chrome web browser and MakeMe VPN from the chrome web store, there are other VPN plugins but MakeMe VPN did not require me to sign up for an account.

With MakeMe VPN enabled for the United States, head to http://photos.google.com and that is pretty much it.

You should get an auto notification straight away that you need to click on OK:

Once you have clicked on OK, that is as hard as it gets.

Drop the VPN connection, uninstall MakeMe VPN and relaunch chrome. Head back to google photos and now you can confirm that is now enabled. 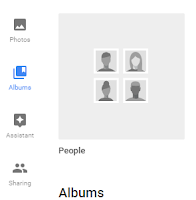 Within albums, look for the album titled People, there might not be anyone in here yet... this could take a week or two for google’s servers to work their magic before you start to see the results. It certainly took 2 weeks plus for mine.

In order to turn off this feature, or even just as a second way to verify it is active on your account, then head to settings and look for the option Group similar faces.

These views, for what they are worth, are mine and are not endorsed by anyone/thing associated with me.
Any tips on this site you carry out are done so at your own risk, I will not take responsibility for any negative impact they might have.